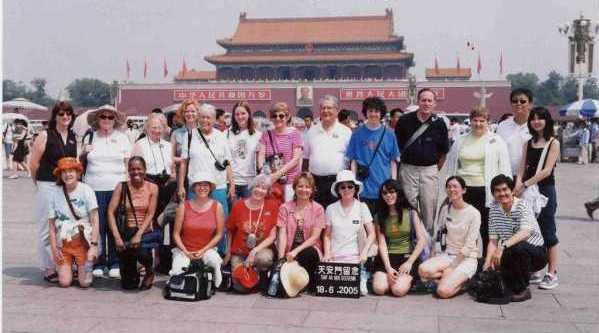 Four of us friends (Nila, Mary Ann, Amanda, and myself) joined a group of 21 on a 12-day tour of China. We were assigned a national guide nicknamed Tiger, and a local guide was provided in each city (with the exception of Beijing, Tiger's hometown). Our hotels were very nice, and American/Chinese buffet breakfasts were provided. Lunches were Chinese dishes served family style in various restaurants. Beer, bottled water, and soft drinks were included with almost all of the lunches (in China, beer is as cheap as soft drinks). We were on our own for dinner, and we four had our meals or snacks in the hotels. I did NOT drink the water unless it was bottled, even to brush my teeth. I didn't suffer any stomach ailments, either.

We began our tour in Beijing, the present capital of China. It's a large city of 14 million, and its heart includes some very old buildings. It was easy to forget that China is Communist, except for the presence of marching soldiers there. The 2008 Summer Olympics will be held in Beijing.

Xian, the ancient capital of China, was my favorite city, partly because our hotel was truly a peaceful garden, but also because I simply felt at home in this area.

Guilin is famous for its landscape. Its hills are oddly tall and pointed, and flooding had occurred recently on the Li River. Because of that, we were unable to see cormorants fishing, but at least we were able to take the Li River cruise; some earlier tours were canceled.

Shanghai is incredibly large, busy, and populated. We took side trips twice, traveling through much of the city, and for miles upon miles saw nothing but tall, thin skyscrapers. I was told that 80% of the world's building cranes are in China, and I believe it.

The Chinese people we came in contact with were friendly. Of course, the ever-present vendors were noisy and pushy. We quickly learned to avoid eye contact and not to express the slightest interest in any goods unless we felt like buying something. Bargaining was rather fun, which surprised me as I'm not usually fond of doing it. Very few Chinese we met spoke much English, which put us on an equal footing since we spoke almost no Chinese.

We learned some courtesy words, such as ni-hao (hello) and xie-xie (thank you), but depended largely on our guides and a lot of pantomime. I had no trouble ordering beer (just say Tsing Tao), but getting iced tea was a real chore!

I enjoyed each of our lunches, and tried a lot of dishes, although I couldn't begin to say what they were. I especially liked the fish, which most of the group wouldn't touch (the fish were served whole, with those eyeballs staring back at you).

Major chains such as KFC, McDonald's, and now Burger King are present in the large cities. I didn't eat in any of them, so can't say what they were like.

Riding tour buses through these busy cities was an experience. The Chinese may have traffic laws, but no one pays the slightest attention to them. It's Boston Rules (the bigger you are, the more right-of-way you have). On one trip, we applauded our driver when he managed to ace out another tour bus by a whisker. I could see the driver's face in the mirror, and outwardly he was as calm as if he were alone on the road. At other times, I had to shut my eyes as we went through intersections. How Chinese pedestrians and bicyclists survive is a real mystery.

China does not have auto companies of its own, but many major brands are manufactured there, so they do not have to import vehicles. The variety of vehicles is astounding. Side by side are pedicabs, trucks, buses, hand-pulled carts—everything imaginable. Some of these carts are loaded to the gills, and I marveled at the ability of the Chinese to pull them. Their gasoline is government-controlled, and dispensed by only two companies.

I went to evening shows in three of the cities, which I enjoyed immensely. Surprisingly, the audiences were largely Chinese. I had a full-body massage and a foot massage, both of which are very popular (and inexpensive) in China.

I surprised myself by buying quite a few items at the various "factories" we visited, such as silk-making and double-sided silk embroidery, and jewelry with jade and pearls. I had to buy a wheeled tote bag to bring my loot home.

Below are some great examples of "Chinglish": 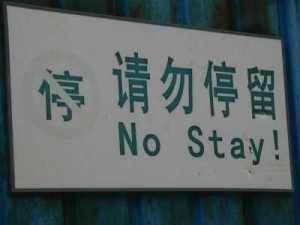 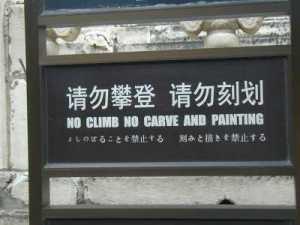 I didn't want to anyway 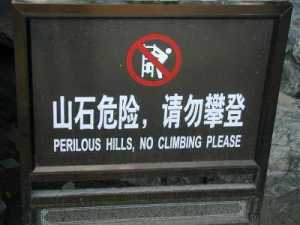 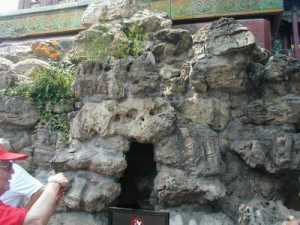 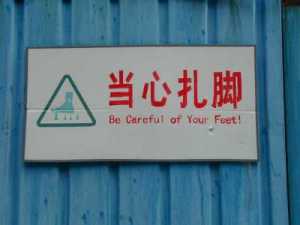 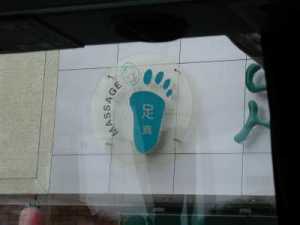 If all else fails, go to one of these 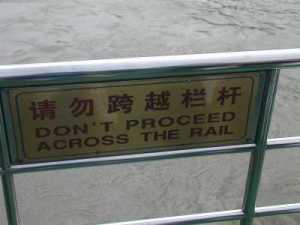 I wasn't planning on it; it's cold & wet 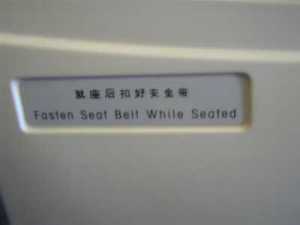 I've chosen some photos from each city. Click on any thumbnail to view them: