Why, after 18 years of RV living (8 of them with no home base), did we leave Park Sierra and return to "stick-house" life? Truthfully, it's not a stick house, just a fancy wheel-less RV that arrived here in two huge sections! We are still governed by Title 25, and park rules exist here too. Oak Creek Park, 5 miles north of Park Sierra, consists of almost 200 manufactured homes. Its members own the homes, but not the land. The park is about 10 years old, and our house was about 3-1/2 when we bought it in March 2006. It was well cared for, and had several pluses provided by the previous owners, such as a detached extra-long single-car garage and an electronic watering system. It's light and airy, and I knew from the moment I saw it that it was meant for us. 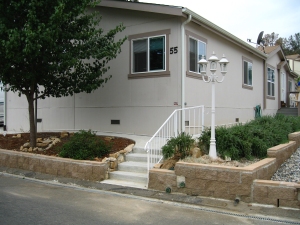 When we moved in, I was still crippled by sciatic pain even though I'd had spinal surgery the month before. Fortunately, the pain began to diminish in the following weeks, and I was able to resume a normal life. 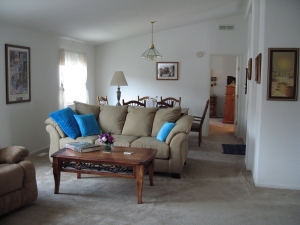 Furnishing a 3-bedroom house was a major hurdle, as we had almost nothing at the beginning. We bought most of it (living room, dining room, and master bedroom) from one store, which made delivery easier and less expensive. Our first furniture, though, was a morning room set, which was a put-it-together-yourself project. Our friends Lee & Kent MacKinnon were invaluable in getting the deed done.

Lamps, rugs, and a computer desk for H came next. (One of the bedrooms is our shared office.) Some items were free, others inexpensive. Friends gave us house-warming gifts and offered us many items, for which we are grateful. We also culled the items we'd stored since moving from our last home 18 years ago, which included many paintings and photos for the walls, as well as bric-a-brac from our years together. We needed larger TVs and a sound system, but all the major appliances came with the house. Now our house truly does look like a home, filled with meaningful and pleasing items.

A large patio was already poured behind the house, but as it faces west, we knew just how hot it would become in the summer. We contracted for a full patio cover, which wasn't completed until the middle of the hottest spell of 100+ temperatures. We also added a metal awning over the back door. 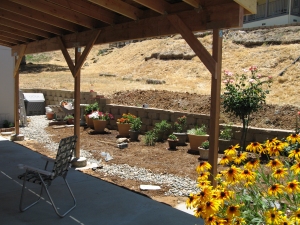 Our yard is small, but it sometimes seems pretty big when I'm gardening. We have a great deal of cement here, a change from the gravel in Park Sierra. The rest of the yard is covered in either river rock or cedar bark. To my dismay, I learned that our lot is mostly solid clay, which changed my landscaping plans dramatically. Many of my plants are in pots, and I'm learning how to care for them successfully. I'm building compost for future planting, but I do it the lazy way, which means slo-o-ow.

Oak Creek is very close to the center of Coarsegold (known as The Village), and we can drive our golf cart there by means of a back path. We can shop at the local grocery, eat breakfast, or wander through the various artisans' shops.

Park life is similar here, in that people get together for potlucks, eating out, and other activities. The biggest differences are that Oak Creek members don't have to work to maintain the park, as Park Sierra members must, and that whatever Management says in Oak Creek is law, although we do have an advisory committee made up of residents. My heart is still in Park Sierra, but I'm gradually becoming more acquainted here. We still have our Park Sierra lot, and I'm active in Landscape Committee.

At 2,200 ft, Oak Creek has slightly colder winters but cooler summers than Park Sierra. The oaks are a different variety, also--gigantic Valley Oaks. The acorns are so big they can knock you silly. Yes, there is an Oak Creek in the park, which is seasonal and much smaller than Coarsegold Creek, which runs through Park Sierra. A nice feature is a small pond above the clubhouse, which attracts birds and wildlife. The clubhouse is much smaller than Park Sierra's, but next to it is a pool and spa (neither of which I've tried yet).

So the answers to the question above are: space, comfort, and modern conveniences (like a washer and dryer!). In a nutshell, it was time for the next phase of our lives.

Above the clubhouse is this pond, which attracts lots of wildlife